Pomegranate is native to Afghanistan, Pakistan, Iran and the Himalayas in northern India. Scientifically known as Punica granatum, this fruit comes from a deciduous shrub growing growing to 5–8 m tall. The fruit has been cultivated in other parts of the world including Algeria, Azerbajian, Turkey and South East Asia, East Indies and tropical Africa and has been introduced into Latin America and California by Spanish settlers in 1769.
Post a comment
Read more

Joy is taking a photo! 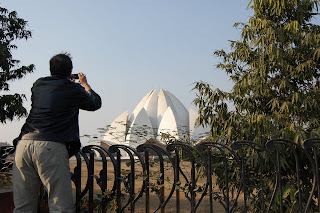 Joy is taking a photo!
(Pic taken at the Lotus Temple, New Delhi, India. December, 2007)
The Lotus Temple is the Bahai House of Worship. This is supposed to be a twentieth century wonder of marble, dolomite and cement. Visit Travel Pangs for more of the Lotus Temple.
Post a comment
Read more
More posts