Cooking out of a Carton 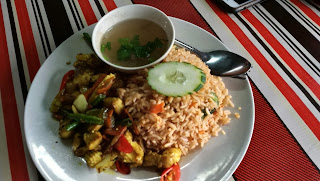 Just this morning, a Malay colleague teased me about giving him just a simple treat the last time. He reminded me of the day when we were in Semanggol which is a small town some 25km or half an hour ride away from Taiping. Also known as Simpang Empat or Simpang Ampat, some colleagues and I, at his behest, had actually taken the country roads to this little town in Perak's Kerian District to have tea and some roti canai; that's an Indian flatbread dish eaten with curry or dal. When we found the shop closed, we went to another instead; and I had tea and nasi goreng kunyit ala kampung; the latter is tumeric fried rice, fried country style. A day later, I took the same roads to Bukit Merah in the east where I witnessed some teenagers cooking rice out of a carton!