Joy is releasing lanterns in the Ganges! 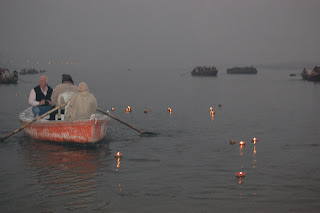 Joy is releasing lanterns in the Ganges!(Pic taken at a ghat in Varanasi, India. December, 2007)The Ganges is one of the major rivers in India. It flows 2,510 km through the Gangetic Plain in northern India to Bangladesh, rising in the western Himalayas in the Indian state of Uttarakhhand and draining into the Sunderbans delta in the Bay of Bengal. The river is considered holy by Hindus who worship it as the goddess Ganga. If you were to visit a ghat in Varanasi in the early morning, you'll not just get to see Hindu pilgrims taking a morning bath but you'll get to see some releasing lighted lanterns into the river. You can buy a lantern and release one yourself, too!
Post a Comment
Read more
More posts