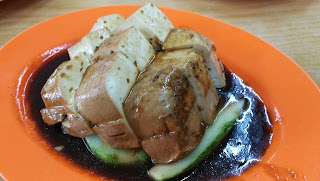 Once, enroute Malacca, I remember stopping somewhere in Serdang, Selangor. Mau Wei was sending Yen Yen to the airport to catch a plane to Ireland and I had hitched a ride. After sending Yen Yen, we would go to the historical city; not after spending a night in the hotel in the vicinity of the airport of course. Mau Wei had stayed in Serdang when she was in varsity; so, it was kind of deva ju for her. She wanted to take us to an eating shop which she used to frequent and there we would have our lunch. Then, it was after two, way past lunch hour. I suppose we were lucky enough to be able to tuck in some plain steamed rice with chicken and stewed eggs and brown tofu.