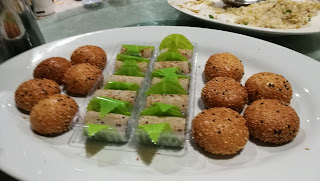 It looked like a mushroom dish but digging into it revealed a mass of  white jelly-like strips of gelatin, not exactly flavourless but slippery to the taste and reeked of an animal origin. It was the first time I tasted pork tendon and thought it wasn't really bad. Ah Heng probably hadn't tasted it before; but when I invited him for dinner on Wednesday, he said he couldn't make it since he was attending one himself at Flemington. My dinner coincidentally was there too but his was in the hall and mine was in a VIP room. We went to Flemington separately, met briefly outside and then, joined our respective group. Later, I sent him pictures of the food we had had to let him know what he had missed!
Can you identify the dish which features pork tendon?