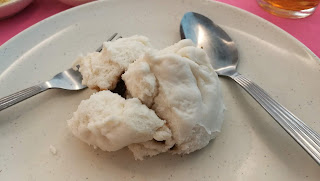 Brunch was in the cards! Having travelled an approximately three hour journey from Taiping to Alor Setar, the capital of Kedah; we were not immediately ushered to a Chinese restaurant where we would have lunch. We paid a short visit to a Chinese school first where an art festival was in progress. Then, it was off to the restaurant which was half an hour drive away. Lunch was long in coming and friends ordered bao, the Chinese bread-like dumpling to ease the empty stomach. When lunch came, I was mesmerised by the big white steamed fish. Someone said it was a pak chou but never mind, it wasn't that easily recognisable anyway; especially when it was heavily sprinkled with chopped chillies and chai po Chinese preserved radish. I tasted some granulated sugar in them.