Food for a Scholar 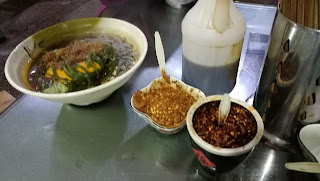 Crossing the Bridge noodles 过桥米线 is a rice noodle soup from Yunnan province, China. It is one of the most well-known dishes in Yunnan cuisine. Most probably I've heard of it during my first trip to Kunming when a tourist guide told of a devoted wife who had to cross a bridge to bring food to her scholar husband who was studying hard for his imperial exams on a small island. The soup she brought would be cold and the noodles, soggy when she served it to her husband. Hence, she filled a large earthen pot with boiling broth with a layer of oil on top to insulate and keep the broth warm. The noodles and other ingredients, she kept in a separate container, and would mixed the two together and voila, there you have  a warm Crossing the Bridge  noodles. My friends and I had that for dinner one night not long after we arrived in Kunming. We were on our way to the terraced padi fields in Yuanyang.