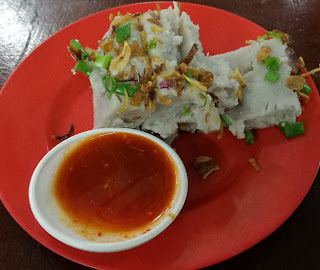 Or Kuih or Yam Cake can be such a pretty sight! The cake is of course made from yam; yam pieces actually with dried prawns and rice flour  which is first steamed in a big tray before being garnished with deep fried shallots, spring onions, chillis and dried prawns; and then cut out into the pretty little pieces of gems they are. One morning, I just couldn't resist getting my hands on the cake which was sold in a stall which I went to for breakfast. The cake looked rather dainty and appealing with its tiara of brown and green for no chilli was used; and it would be just heavenly to just dip it into the chilli sauce; for that's how the cake is eaten. Later when I went home; to my surprise, there was some yam cakes on the kitchen table, courtesy of a neighbour. The latter looked rather deplorable but surprisingly tasted better than the one I bought; the former, a bit hard, a disappointment.