A Lesson in Doughnut 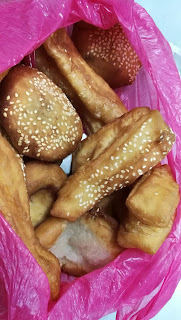 When I treated Miss M, the American lass to a 咸煎饼 Harm Chee Peng which I bought in town, I was in  for a lesson. Thanks for the doughnut, she said; and I corrected, That's not a doughnut. You call it aharm chee peng. Then, I checked in the internet and was surprised to find that Harm Chee Peng is indeed a doughnut, a Chinese fried doughnut! Unlike its Western couterpart, no butter, milk, and eggs are used; only bread flour, yeast, baking soda, alkaline water, and sugar. Then,  it doesn't have to have just sweet red bean paste in it. The one stuffed with white glutinous rice is just a variety; and I suppose there are many more!